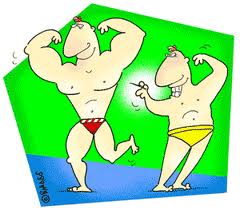 Thanks to the vigilance of one of our neighbours, we had strongly suspected for some time that The Jockey Club had been conducting a beauty contest to find their Mr Concrete – the preferred construction partner for their planned 1500 units at Kempton Park.

You can just imagine the proceedings in the carpet-tiled splendour of the Kempton Park Banqueting Suites. A contestant fidgets nervously on a chair outside the main room, wondering whether the Chippendale-style collar-and-tie and mankini combo – the brain-child of his Corporate Affairs Director – really was such a good idea. In he goes. A quick sashay up and down the catwalk, and then the interview by a 1980’s game-show compère who has managed so far to evade the criminal courts.

A quick run through the bullet points on his cue-card, which he had managed to secrete somewhere about his person: Environmental Construction Methods, Green Energy Initiative, Design for Sustainability, the Advancement of World Peace, and, most importantly, the guarantee of a Superlative Return for the Stewards of The Jockey Club. And out he goes to polite applause, thinking he has probably done enough to secure the contract. Only to find, waiting on that same chair outside the room, a sleeker and more muscular version of his former self, sporting the kind of half-thong made popular on the beach at Marbella earlier this summer. His heart sinks.

So it was intriguing to have our suspicions confirmed earlier this week. (OK, OK – not quite the way we imagined above, but you get our drift.) It happened at a meeting of the Spelthorne Overview and Scrutiny Committee, held in public every second month.

A2Dominion, a very large charity whose purpose is to provide and manage social housing, had been invited in to discuss that subject with the Committee.

A2D have a long association with Spelthorne. They have 7000 homes in the Borough, and they waved the carrot of £350m which they have available to invest, limited only, so they said, by the planning laws, and the release of land to build on. With the grant regime of past years (from which they used to derive their income) now much reduced, they have also gone into the property development business to generate their income.

And then up popped a PowerPoint slide (Slide 7 in Document 55 attached) which set out their Future Prospects. The last of the bullet points states “Kempton Park”.

The Committee’s Deputy Chair asked the A2D man to expand on that final bullet point. He explained that A2D had put in a bid for the option to buy, subject to the granting of Planning Permission, some 70 acres of land on the Kempton Park estate. The A2D bid had been unsuccessful, however. They had lost out to a rival bid from the volume house-builder Redrow.

So far, exactly along the lines of one of the options The Jockey Club have been considering, as we were told almost a year ago by some of The Jockey Club’s consultants.

Then, however, according to the notes of someone who attended the meeting, the Committee’s Deputy Chair, a little surprised, reminded the A2D man that no Planning Application had been received by the Council, no consultation had been conducted, and that the whole project is very far from being a certain outcome due to a number of planning obstacles, not least being the Green Belt status of Kempton Park.

The A2D answer came back in a most relaxed and casual manner. “That may be your opinion, Councillor.”

So, we have two more organisations, A2Dominion and Redrow, who have gained the impression (strong enough to put in bids for an option on land at Kempton Park) that the removal of the obstacles standing in the way of granting planning permission for Kempton Park is a done deal. Mouchel, The Jockey Club’s transport consultants are another such organisation. They put in writing some time ago that they fully expect Spelthorne’s housing targets to be raised to provide a justification for the number of units planned for Kempton Park.

But it is much more than that. That remark by the A2D man is actually a very serious allegation. And since the business of the Overview and Scrutiny Committee is to, well, scrutinise things like this, we trust that as a matter of urgency they will conduct an investigation, in public, as to how all these people in the property development business have come to gain this impression of planning permission being a done deal; from whom they gained this impression; and holding those people, if there are any, to account.

We will be only too happy to make all our FOI evidence available to assist the Committee in their deliberations.