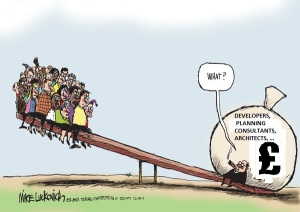 You may already have read our opinion (in a recent Sunbury Matters)  on “Stakeholder Events” (aka Local Plan Forums), one of which we attended as part of the consultation on the hugely increased housing need calculated by Spelthorne’s and Runnymede’s consultants. Those housing need figures in the Draft SHMA Report were:

(Spelthorne’s current housing target, by way of comparison, is 166 new houses per annum.)

That Stakeholder Event was completely dominated by developers, planning consultants, architects and the rest – all prepared to do their damndest to make sure as many houses are built in the two Boroughs as possible. The record of submissions from those who attended that Stakeholder Event has now been made public.

The following organisations said that the housing need figures were, for various reasons, too low:

(Terence O’Rourke are also leading the planning for the Kempton Park development.)

The following made submissions offering particular sites for housing development:

We now also have the Final SHMA Report. Guess what? The housing need figures have been increased:

You may also have heard that a Development Market Panel will be set up to rule on the development status of land. Borough Planning Officers will sit on this Panel, as well as developers, those with land interests, land promoters, local property agents, and registered providers. Residents, however (or any expert they engage) will not be allowed to be privy to the goings-on of the Development Market Panel, because residents, and any expert they engage, would be biased – they say.

In view of the bias shown by the consultants, developers and land owners in the list above, we would dearly like to trust that they too will be banned from being part of the Development Market Panel. Fair’s fair, right?

But we’re not holding our collective breath.