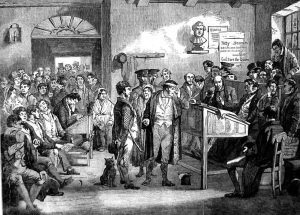 Sometimes it seems we are stuck in a time-shifted version of that interminable court case in Bleak House: Jarndyce vs Jarndyce. Jaundiced vs Jarndyce, more like.

You may remember in the distant mists of time the document from the secret meeting of the Local Plan Working Party on 3 September 2014 which was leaked to us. The Council was furious this document had been made public.

We asked to see other papers from this meeting. Spelthorne refused, saying they were draft documents and they were entitled to keep them secret. So we complained to the Information Commissioner. That process rattled on and on and on and we eventually took the case on Appeal to the First Tier Information Tribunal. We finally received the Tribunal’s judgement in early March 2016. The Tribunal agreed with us and gave Spelthorne 35 days to produce the documents.

The documents are not earth-shattering. You can read them here, here and here. One wonders why Spelthorne fought so hard to keep them secret.

And the Tribunal judgement proves another thing. Spelthorne is not entitled to claim draft status for aeons, on the justification that they need a “safe space” within which to work. The Judge mentions a period of seven months as being more than sufficient for this purpose. So the “draft” period is less than that.